It was a lovely sunny bank holiday Monday, and we decided to fill in our of our small gaps – this time between Ogmore and Southerndown. Only a 3.8 mile walk but we decided to leave the car at Ogmore Castle and walk both ways.

The coastal path from the castle heads across the road and on a very unused path which is overrun with stinging nettles, so we stuck to the road and the path soon found us again.

Thankfully today the tide was in, so I avoided having to take Andrew on the stepping stones again as we walked along the estuary. 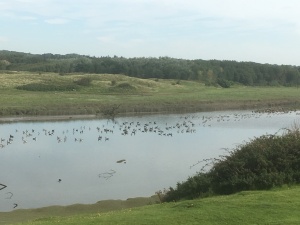 Ogmore is popular any time of the year, but on an August Bank Holiday with the sun shining it was officially “heaving” and has been declared our busiest section of coastal path so far.

The rock formations at Ogmore are very stark but also strangely beautiful.

I hadn’t spotted that Sharon had taken us off the coastal path in order to “be nearer the coast”.  I was nearly part of the coast as we walked upon a narrow ledge over a sheer drop – until I finally persuaded Sharon to head inland to rejoin the coastal path – the signs gave me the clue that all was not as it should be!!

And before we knew it we were at the Southerndown car park and had joined up with our previous walk. I won’t bore you with the return journey, although needless to say it involved a stop for coffee and cake.

On a dry but very windy day we decided to walk in the Gower from Oxwich Bay to Rhossili. We had wanted to include the walk out to Worm’s head but the tide times and the bus times wouldn’t coincide – so we parked in Rhossili and got the bus to Towers.

We walked down the road to Oxwich Bay and found the coastal path sign before walking along the beach front.

We passed St Illtyd’s church before starting a very steep climb and descent (apparently to avoid a landslip – so the book tells me).

And then we walked around Oxwich point and along to Lucas Bay.

We had decided to stop for lunch at Port Eynon, and found ourselves walking both against the strong wind, and against 98 two person teams completing a run/swim from Rhossili to Oxwich – so on narrow parts we had to stop and let them through. We also found that part of the path had fallen into the sea so needed to detour inland and back out again.

In Port Eynon we got some cakes at the Life Boat open day and sat down to eat them when we heard “Dad!” “Sharon!” and saw Dan with his head stuck through a hole receiving a lot of sponges in the face – he was running the stall for the life boaters.

After Dan showed us the sights of Port Eynon we continued up and around to Port Eynon point.

The walk then follows the coast all the way to Rhossili – but boy is it hilly. We walked over Overton Cliff, Common Cliff, and Horse Cliff, and the altitude was clocking up.

In the sun it was very warm, especially up the hills.

And we picked the best view of the day for our afternoon coffee and cake.

We set off again having refueled and finally we could see Worm’s head in the distance. 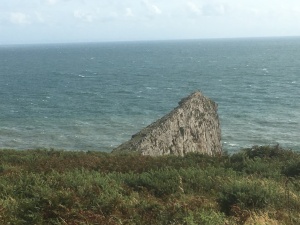 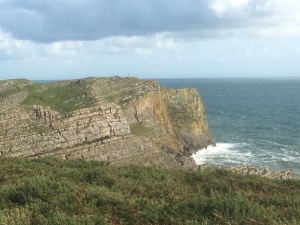 By now it was about 4.30 and we had been walking for over 12 miles, but we pushed on up a few more hills to walk around the top of the cliff above Worm’s Head and to Lookout point.

And we had made it back to Rhossili- A harder day than I had thought it would be, but then I was only just recovering from a night of being sick 30 hours earlier. There are more photos on the Walkies Bonnie Facebook page.