This is a double-header update to cover the walks both sides of Tenby.

On the Saturday we set off early from home and drove to Amroth, parking right on the seafront with free parking. We were also only 10 metres from the bus stop, so today will count as the day with least extra “non-coastal path” walking.

After a delicious “Pirate” breakfast we got the bus to Tenby, and that was quite a scary ride down some narrow lanes.

And off we set from Tenby for the walk – the coastal path isn’t signposted at all through Tenby so you just make your way through the town and down to the harbour and North beach.

A view of North Beach

A beautiful day on North Beach

The coastal path then rises sharply firstly along a road and then through some fields. 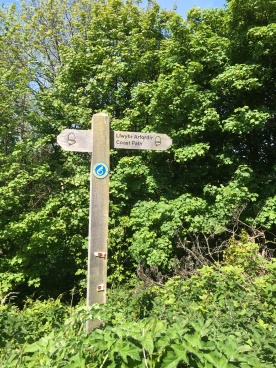 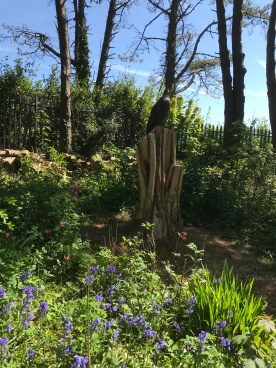 And a good path

The path then stays quite high for a while with views of the coast through hedges and trees before dropping down to sea-level in a little cove just before Sandersfoot. We stopped for a coffee and Sharon decided to have a paddle in the very cold water.

The tide was in too far to walk around the coast on the beach, so we climbed back up to continue the walk to Saundersfoot. 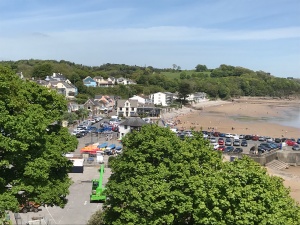 And after a surprisingly short stop for shopping we headed out of Saundersfoot in the glorious sunshine and through a tunnel, yes a tunnel, to get to Coppet Hall Point.

After a suntan lotion stop we went through a second tunnel and along a very well walked part of the path to Wiseman’s bridge. By now the tide was well on the way out, and we were able to walk from Wiseman’s bridge all the way to Amroth on the beach over rocks. 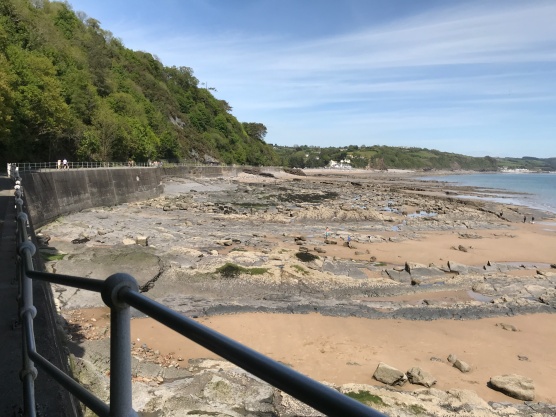 Over the rocks we go

What a lovely beach when the tide is out 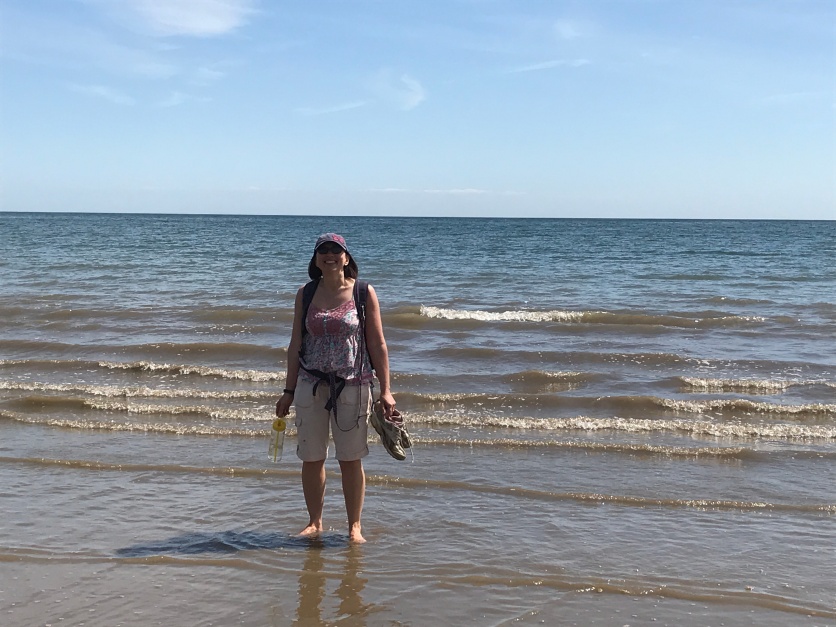 Time for another paddle

And there was the car – so a lovely stroll of 7.6 miles and we had joined up to our previous Laugharne to Amroth walk.

After a great evening in St Florence and a good pub meal we set off the next morning for day 2 – parking in Tenby and getting the train out to Lamphey – which is about as close to the coastal path as we could get to start today. 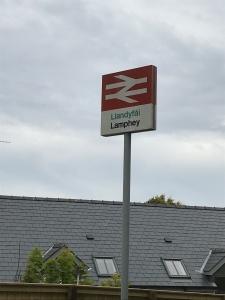 By “close” I mean about 2.5 miles of walking to get to the coastal path, most of it along a road, so not the most exciting of starts, but at least we had some cloud cover today to stop it being so warm. And after a steep descent we made it to the start point by Freshwater East beach. 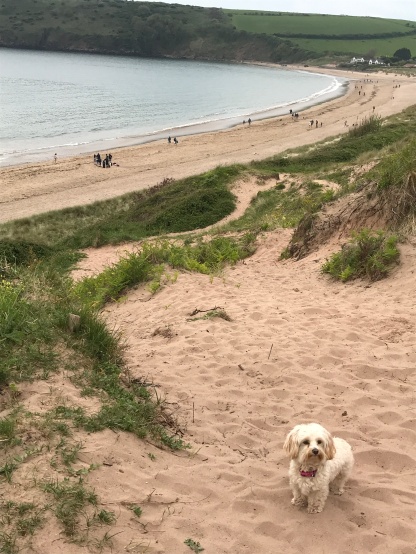 Bonnie near the beach

The coastal path heads behind the beach through dunes, and then sharply up a steep climb to get to West Moor Cliff; the views here are mainly behind us back towards Freshwater East.

Ahead of us though from this height Sharon kindly pointed out our future path around Swanlake Bay, and it was a big drop and rise again…..

The bay ahead of us

The climb up East Moor Cliff was a big one, and to then turn the corner and see another drop down, this time into Manorbier Bay was a little disheartening, but the views along here were magnificent because of the height.

We stopped for lunch at Manorbier Bay, but didn’t have time to see the castle. Then off we set again up Priest’s nose this time, and if you look closely you can see fishermen sitting in very precarious positions on the rocks below us.

A rather large crack beside the path

Another climb ahead of us

We then climbed up and around Presipe Bay, where thankfully we didn’t have to drop down to the beach for once – although Alice and her family had done.

The path then has to turn inland to avoid Manorbier firing range, and there were some neat dog openings on the stiles. It was also a chance for the pace to pick up on some concrete paths.

Then suddenly Caldey Island came into view, and from an angle that we had never seen before.

Then once more we dropped a fair distance towards Skrinkle Haven, but this time the way back up was steps, and lots of them. Andrew decided to tackle them in one, and then needed a 5 minute sit down to regain his breath. 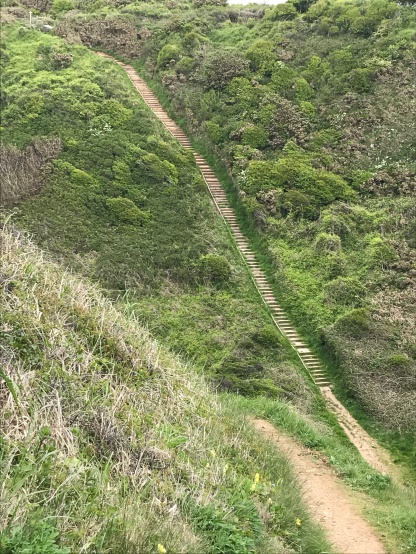 The steps before we dropped down to them

The steps in front of us

Then it was quite a surprise to come out besides some caravans on the Haven Lydstep site, and we got a bit lost navigating our way around the caravans, but Sharon got us back on track, even if it was a very much unused track with lots of stinging nettles.

After Lydstep the path heads up again to Penally, and with the red flag down we were able to walk across the shooting range, and past the trenches used to train soldiers in WW1.

We then arrived at Giltar Point, but were not feeling brave enough to climb out on it – hard to believe that this beautiful spot is so close to Tenby South Beach, and gives such good views of Caldey Island. 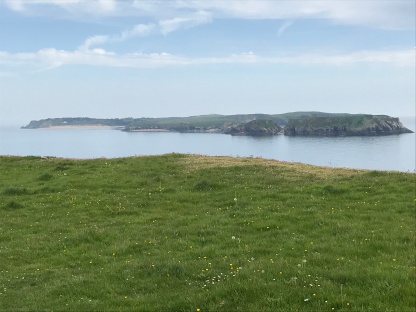 Then we headed through a beautiful small wood and arrived at South Beach. 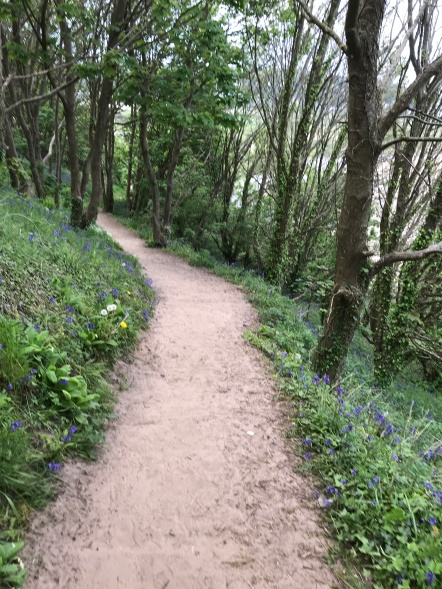 Who knew this wood existed? 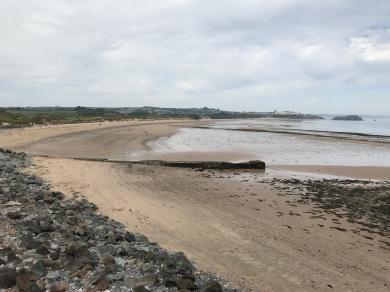 Looking back to where we have come from

And we were back in Tenby – so a lot longer day than yesterday – around 6 hours of walking, a total of 15 miles, and over 210 storeys of height. But for the coastal path it was 11.7 miles completed.