Our first walking weekend of 2019 – and a series of landmarks today for us. This walk is the prelude to our first weekend of walking on Anglesey. It is also the last walk in the North Wales section of the book, and the walk which takes us over half-way around the coastal path of Wales.

After a 4 hour drive to get here we were raring to go as and parked in Bangor and got the bus to Morissons in Caernarfon to start the walk. The entire walk today is along the one side of the Menai Strait, past both bridges and to the Pier in Bangor to join up with this walk.  The first few miles of the walk followed the bike path so were flat and easy.

The tide was on it’s way out and the Menai Strait looked calm, if rather cloudy. 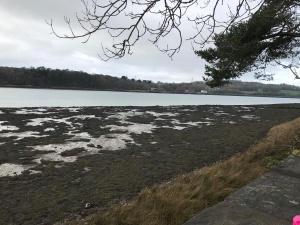 We then headed through a boat yard at Port Dinorwic and across a small bridge to a new part of the coastal path which has not long been open.

The walk then turned to woodland and up a hill. 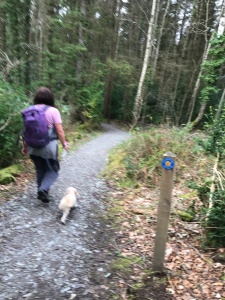 And then we went through the Faenol Hall estate, and our first mistake of the weekend. We went straight across a field of sheep rather than behind a fence along the edge. We only realised this when we spotted a walker behind the fence, and decided to climb the fence to join the path – only for the path to then go through a gate and back into the field we had just left!!

And then the first Menai bridge came into view – Pont Britannia, the newer bridge which lorries can use.  I say newer but it was built in the 1850 as a rail bridge but after a fire in 1970 it was remodeled to take vehicles.

Then a series of small islands came into view in the Menai Strait – and although they were very pretty houses, the noise from the roads must be rather annoying.

Another wood then followed through Treborth Hall.

And then the original Menai Suspension Bridge (built in 1826) came into view, and this one we had to walk up to rather than under.  More on the Menai bridge later in the weekend when we cross it.

After a further section of flat walking along the A487 the path turned left and went past Bangor football ground (a free game if a match is on), and then over a series of stepped ups and downs through woodlands at Nant-Porth. 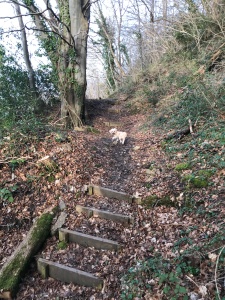 As it was now low tide we were able to walk along the shore towards the pier and our end point.

And Sharon was not hanging around.

And then we arrived at the pier: deliberately an easy first day as we couldn’t start till 1pm. And again we couldn’t go onto the pier because we had Bonnie with us.

Unfortunately at this point Sharon’s phone died – unfortunate for her as her bus pass was on the screen, so I got the bus back to the car and met Sharon at the supermarket once she had bought the items we had forgotten to pack.

2 thoughts on “Caernarfon to Bangor”