Back in April 2016 we completed part of a walk in the Gower, from Pen-Clawdd to Llanrhidian. The whole walk actually ends in Llangennith and, without the kids this time, we decided to tackle the rest. By the time we had finished lunch and waited for the rain to stop it was 2.30pm when we started.

So the starting point was to walk back down the hill into Llanrhidian, which felt a lot better than the walk up it did last year!!

The first couple of miles don’t feel particularly coastal as they are mainly through woodland.

We got distracted by a castle up on the hill above us and thought the coastal path also went up this steep hill…..

but despite the lovely view of Weobly Castle (one to come back to with more time), it was the wrong way and we ended up going back down the hill again.

We then hit Landimore Marsh which was our first sight of the coast today and thankfully the tide was out so we had no risk of wet feet.

We even stayed dry over the stepping stones as well, despite a wobble from Andrew.

We had planned to do the Burges Island optional loop so turned right rather than left after Burry Pill but then we were faced with a diversion. 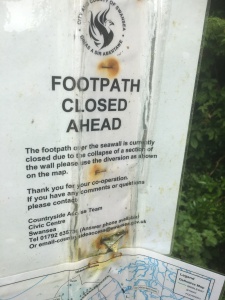 Sharon did consider ignoring the signs and going on, but the picture next to the sign suggested that about a 15 foot long section of sea wall was missing and it would have been one heck of a jump to get across. So we followed the diversion through a nature reserve and came across a fantastic little craft shop and cafe called Cwm Ivy Coffee Shop.

The view with our tea and cake was fantastic and, once refreshed, we walked down the hill to the beach.  In hindsight we should have stayed at sea level as the tide was out, but the climb to the top of Hills Tor was worth the effort when we saw the views.

Best views of the year so far across Broughton Bay from the top of Hills Tor. The path then passed by a campsite and among Delvid Burrows before climbing again to Blue Pool Corner and the small island of Burry Holms was ahead of us.

From here it is a pleasant walk along Rhosilli Bay Beach to Llangennith. 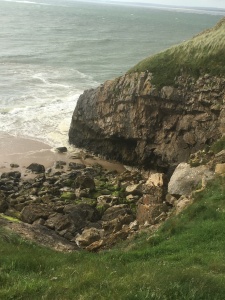 And then a walk up the road to Hillend campsite where the path continued right, but we had to go left to end this leg and head up the road a mile to get the last bus of the night back to Llanrhidian (7pm and £3 each for those who may need the information in the future).

So the total walk was 13 miles, of which 12 miles was coastal path, making 292.2 miles completed and 577.5 miles to go.  This day had something of everything and was a wonderful afternoon out.