Day 3 of our walking long weekend, and today was the longest day of the weekend. Our walking bible put the walk at 14.5 miles, so we allowed all day for it at a gradual pace. Unfortunately, having parked at Llanddona, we again had the walk up the steep hill to the bus stop before we could even get going.

The arches on the bridge just fit a bus through, but I wouldn’t fancy that route day in and day out.

The coastal path then dropped down the hill leaving the bridge behind us.

There are 4 small islands in the Menai Strait but from this side you could see that one was connected to Anglesey by a bridge.

After a mile or so the path turned left up a steep road, and away from the coast. For the next few miles there was no path by the waters edge and no pavement on the coastal road, so the coastal path took a ‘high ground’ route, giving great views of Snowdonia. 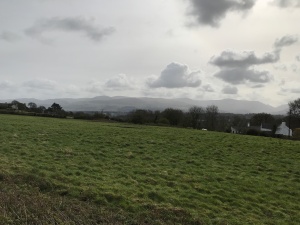 After some “debate” about whether to walk through a swampy field as per the coastal path sign or to take a slightly longer route along the road (the road won) we started the descent into Beaumaris and it’s colourful houses.

The tide was high at this point, and up against the sea wall.

We stopped in Beaumaris for a nice coffee and cake at Jolly’s coffee House and Patisserie.  Highly recommended for lovely fresh cakes, and an amazing bank vault in the basement. We will be returning to Anglesey just to spend time looking around the castle and enjoying the lovely shops and eateries of Beaumaris. But for today, suitably refreshed, we headed past Beaumaris Castle (the castle was never finished as it was built too late during the conquest of Wales) and along the road for a short section as the path was closed for drainage works.

And then back along the shoreline around Friars Bay till we came to a sign…. 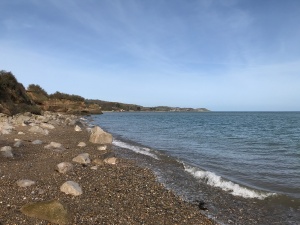 We had to climb over, and under, a few fallen trees, and then we came to a point where there was a rocky outcrop and no way over it, so off came the shoes and socks (and in Andrew’s case the trousers as well as he couldn’t roll the legs up) and we waded around the first rock, only to find a second one, so the wading continued after our freezing toes had braved the stony beach …….ouch ouch ouch ouch.

We dried off our feet and got dressed, only to see that in those 10 minutes the tide had gone out far enough that we could have walked around the rocks without getting wet – you have to laugh – or cry!!

The coastal path was then a mixture of road and coast up to Porth Penmon.

Suddenly in front of us was a series of buildings which make up Pemmon Priory Church. There is a pigeon loft of the grandest design, Abbey ruins, a church and a well. All founded by St Seiriol.

If you wanted to drive to the lighthouse the next part was a toll road, but we were walking so it was free.

Beyond Trwyn Du Lighthouse was the island of Priestholm, also known as Puffin Island, where St Seiriol set up a monastry in the 6th century which was accessible at low tide. Apparently the puffins were wiped out by rats in the 19th Century and today it is protected for the cormorant colony.

After a refreshing coffee at the lighthouse cafe we continued around the coast. According to our book the end was almost in sight now, and the coastal path should have headed inland to cut off quite a bit of the corner. But unknown to us they had decided to move the path right up against the coast, adding an extra mile or more to an already very long wall.

We had various paths, fields and then marshland to navigate across and by now it was gone 5pm and starting to get cold.

Here are various pictures of us walking across fields, and by now Bonnie was very tired and refusing to walk any further so we took turns carrying her.

A steep descent followed to get to the beach and at around 6.30pm we made it to LLanddona beach.

Finally we hobbled to the bridge and the end point – with the car just a few more steps away.

The running total is now 457.9 miles completed and 417.3 miles to go. A rest day tomorrow to let the feet recover, and then hopefully two more days of walking if we are up to it.