Our last walking weekend of the year and a final chance to get some serious mileage in before winter. This weekend we will be on the Lyn Peninsula section of the coastal path as well as the Meirionnydd Section as our campsite for this weekend is right on the edge between both sections of path. 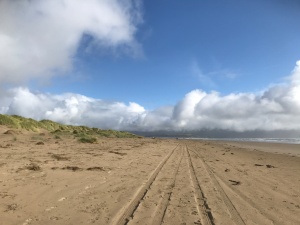 We had about a mile to walk until we needed to go up the steps at the end to get around the cove at Sampson’s Bay.

And here is the BayWe then walked through some woodlands, and through Pen y Banc nature reserve to get to Borth-y-Gest.

Borth-y-Gest used to be an important harbour until Porthmadog was built, now it is a sleepy colourful harbour.

Rounding this harbour bought us to the much larger Porthmadog Harbour with tall masts and a maritime museum.

After joining the main road to cross the river the guidebook told us to cross over and follow the bike-path along the salt marsh – the views were nice, but we later found out we could have walked up high on ‘The Cob’ which would have been even nicer looking out to see and with the heritage trains. 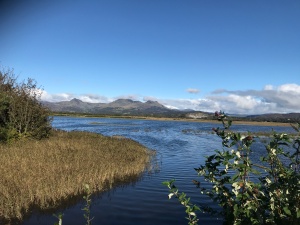 At the end of the path we had to walk under an arch and cross the road and railway line.

Then up a steep and muddy path – but the views at the end of Porthmadog and beyond were well worth it. 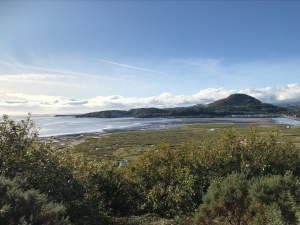 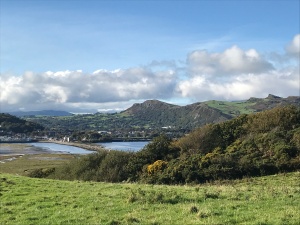 We then crossed some fields and hit the edge of Portmerion – but as you have to pay to enter we skirted around it. At this point the signage became rather vague and we also found a fellow lost coastal path walker so we teamed up and walked down the Portmerion access road until the coastal path crossed over in front of us, we could rejoin it and we said our goodbyes to the slower walker as we had a train to catch.

The next section was all along the main road so we could get a good pace up and we arrived at the railway station with 2 minutes to spare.

A nice 15 minute train ride enabled us to catch up on cold coffee from the flasks and a snack, and then we arrived in Criccieth and walked the half a mile back to the coastal path.

In Criccieth we first had to walk up and down the hill to pass the castle.

And then we walked along the seafront at Criccieth.

We tried to stay on the beach the whole way to Morpha but the tide was in just too far at Graig Ddu and we had to climb up the hill.

But looking down we could see a way to clamber down the rocks and get back onto the beach rather than climb even higher, so with the light starting to fade we made our way gingerly down the rock-face, mostly backwards!!

It was then about 1 mile along the beach to get us back to the campsite and all checked in by 6.15pm. A good afternoon of walking with plenty of views and sights of interest……10.3 miles walked today, making 516.7 miles completed and 358.5 miles to go. Now off to re-plan the rest of the weekend as tomorrow the rains come in early in the afternoon and we wanted to walk 15 miles before they do!!