This walk is certainly one of our more challenging, and longest – but it joins up two completed sections (having already walked from Llansteffan to Carmarthen and from Kidwelly to Llanelli). So we set off at 8.15am to drive to Kidwelly station just in time for the 9.30 train. It was a bit of a surprise to have to put our arm out to stop the train, but thankfully it did stop and we got on and paid the £9.60 fare. The train station at Carmarthen was deliberately the end point of a previous walk so directly we set foot off the train we were at the start of the coastal path – and today was one of those rare days when every step taken was part of the coastal path. 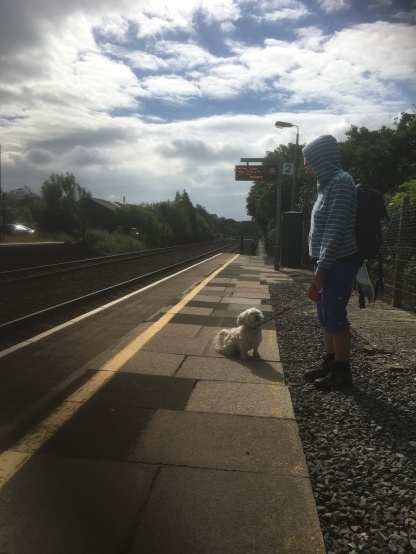 Waiting for the train to arrive – arms at the ready 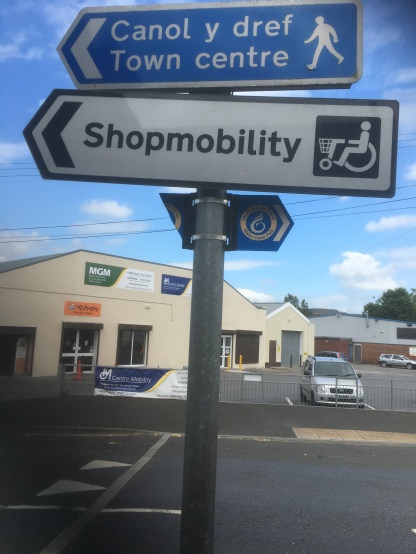 The start point outside the station

Thankfully within a mile of so, through industrial estates, we hit upon a McDonald’s – albeit the worlds slowest McDonald’s – nearly 20 minutes for breakfast to arrive – we thought about sending Cleo through the drive thru. 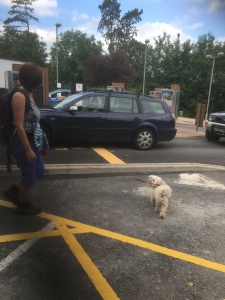 Then we were on our way and the main road soon became a slightly quieter road (but with no pavement) and then, once we had past through Croesyceiliog, we turned right down a country lane. Finally, after 3 miles of walking we got our first glimpse of the coast.

The lane to head along

There is a certain irony to the next part of our walk as it was shortly after Sharon said that it was the best signposted path she had seen, and asked me to picture it, that we got lost!!

We are not sure how, but we missed a turning and ended up following a road and added about a mile to our journey but, after a “sun cream and water” break we made it back on to the coastal path and headed down to the estuary, through Ferryside and to the beach.

Across the train tracks to the beach

Site of our lunch

So after setting off at 9.45 it was now 1pm and time for some lunch. We had over 8 miles under our belts already and so deserved the sandy sandwiches (more mayonnaise next time Andrew – noted) as our feet recovered from the morning. The view from the beach was our previous walk and the castle at Llansteffan. Then on we went, deciding to stick to the path and straight away we headed up some steep inclines. 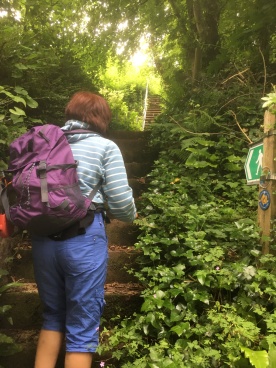 Up some steps, across a field

and down some steps

Cleo faster than the camera could focus

The next part was all woodland paths and fields, again with no coast line. And it has to be one of the least walked parts of the whole coastal paths, judging by how overgrown it was.

Cleo is there – trying t get through an overgrown gate

A view from the field

We walked through various farms and gardens along the way,  stopping at a farm house where a very pleasant lady thought that Cleo was her dog and tried to call her back inside. Then through a tropical forest with a step descent then a climb back up through a field again and our first paddling pool of the coastal path.

Part of the forest walk

Beautiful farmhouse with a lovely lady to chat to

We then headed through Llansaint and the drop down to Kidwelly began, all along an overgrown track.

Annoyingly we could see the train station across the rail bridge but had to walk to the road bridge – we say annoyingly, but when we got to Kidwelly we saw the castle and, more importantly, the Gatehouse tea rooms. 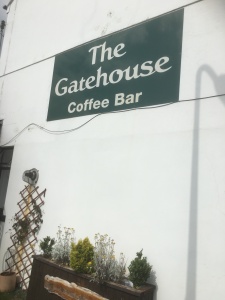 Well it would be rude not to wouldn’t it, and even Cleo joined in on the act:

And a sausage for Cleo

The castle itself looked magnificent and a very reasonable price of £12 for a family admission so we shall return there with all the kids to get our money’s worth. 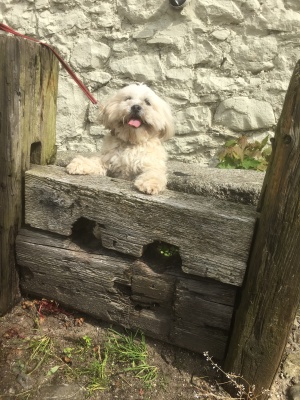 Into the stocks for Cleo

It was then a short walk up the high-street to get back to the car and, just as we arrived the 4.30 train was pulling in. Not the most scenic of days, but plenty of hills and a variety of fields, woodland, coast and town made this a very enjoyable day. And the stats – 15.5 miles walked taking our total to 186.3 miles, and 683.6 miles to go.  Soon be at 200 miles we hope.