Our first walk since Cleo passed away and, to be honest, we probably only did this because the caravan had been booked for months. So we headed up to Rhyl (a 4 hour 30 min drive!!) and found the camp site – the view from the caravan window (while not exciting to most people) was amazing as that path seen out of our kitchen window is the coastal path – we are going to be sleeping about 6 feet from the coastal path!! 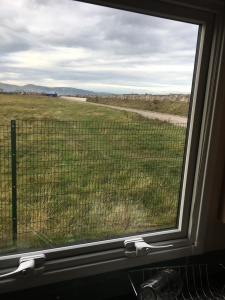 So we walked the 2 miles into Rhyl and caught a train to Colwyn Bay. The weather was overcast but mild for October and the walk was mostly flat. The path was never more than a few feet from the coast on our left, and the wind turbines out to sea were a constant view point.

Colwyn Bay itself is rather run down, as shown by the pier, but the town is trying to redevelop and the beach looked very nice.

Behind us was the sticky out bit of Llandudno (which will have to wait for another weekend) and ahead of us Rhyl stuck out so there was nothing else to see really.

The mystery of the weekend was why the tidal wall was made up of what looked a bit like the top of corkscrews, all made out of concrete and  all individually numbered – over 20,000 of them in total – does anyone know what they are or why they were used here?

Our pace was quite quick, but we needed a refeshment stop and found a very nice cafe which made a lovely cup of tea….

A stop for a game of pooh sticks on the nature reserve and before we knew it we were at the camp site, with a gate right on the coastal path.

One thought on “Colwyn Bay to Rhyl”