Day two of our weekend saw us head from Prestatyn to Flint and, due to an issue with a missed page, this turned out to be further than thought (well than Andrew thought), so it turned into a very long and hard day.

We drove to Prestatyn and parked up by the station, leaving us a short walk to the sea front to pick up the coastal path by the Prestatyn pool. But first some breakfast at Teddy bears and tea pots – yes really – every table had a teddy bear sat in a chair and all around the room were – teddy bears and tea pots – we had a feeling of Norman Bates about it all – but the bears were well behaved and the food was good.

The inital part of the walk was similar to yesterday, along a path by the coast, but quickly the ground changed to sand dunes and rough plantation and it was quite undulating for a couple of miles. 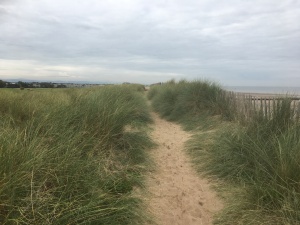 After an excursion through PrestHaven (the Haven campsite) we reached a beach we could walk along, the tide was out and in the distance was a disused lighthouse, said to be haunted by a previous occupant.

The path then headed off the beach – signposted by the best looking signs of the whole coastal path so far….

Across a car park, and around a gas plant, with a nice sculpture on route. 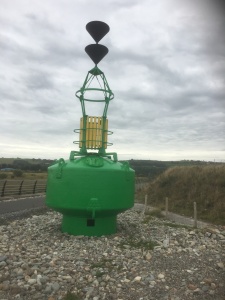 After going under a bridge we were held up for 10 minutes while some stray sheep were rounded up and carried on to the awaiting trailer, then off we went again along a ridge and then a few roads, a bit in land from the coast.

The path then followed the coast except for small estuaries where we had to come in-land, walk along the road a bit then back out again – but one of these in-land sections gave a lovely view.

By now we were really flagging, all the coffee was drunk, and food supplies were low. We headed for the dragon on the hill which is one of the millenium beacons used to light up a network around the country. 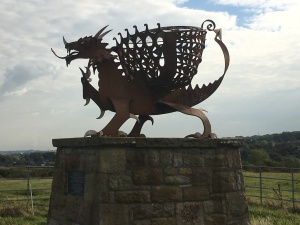 A small diversion followed to find a Home bargains to stock up on drinks and snacks and then we found Flint castle (closed alas), with time for a selfie.

One thought on “Prestatyn to Flint”